1. Tell us about yourself!

I grew up In New York and attended the Massachusetts Institute of Technology, where I pursued my interests in signal analysis, transmission, reception, and other communications-related technologies. My professor/advisor recommended I move to San Diego to immerse myself in the exciting things happening in the communications field. I came to work for a digital communications company, initially working in military communications for the Department of Defense on various military contracts, mainly focusing on satellite communication systems.
I did military communications for about five years. I decided to explore more commercial applications and began applying the knowledge I gained in satellite communication to a new area starting up, digital television over satellite. This was before DIRECTV or Dish Network, and I got into the ground floor of designing and building that type of system. At the same time, I also decided to pursue my master’s degree in electrical and communications engineering here at the University of California San Diego.
After five years, I thought: OK, the technology we’re developing to send TV programs over satellite, could we apply similar techniques to sending data over cable TV lines? So, I started a company to develop digital communications over cable, and we just happened to hit the market at the right time. That was, in essence, the start of standardized cable modems. I was on the ground floor of developing the very first cable modems that are currently being used by everybody in the world these days. Overall, I got into the ground floor of two very prevalent technologies: digital television over satellite (DIRECTV and Dish Network type systems) and data over cable systems.
I transitioned into the smart energy world because cable modems and that technology were becoming a commodity. I decided to do something different and see what the world of energy smart energy has to offer. This was completely different from my previous communications background; this is electrical energy, which I didn’t have much experience in. They were trying to make devices smart using communications, and there was overlap in the communications skills that I had learned and applied to smart energy systems. That’s how I Initially started with Kitu in 2010-2011.

2. What is your history with Kitu?

I originally started as a contractor helping to address some of the security aspects of the system they were building, as I had some background from my previous work in communications, error correction, and encryption. I added low-level security to their products and, soon after that, became the VP of Engineering. I oversaw all the technical engineering-related functions and led the team in internal development for several products.
After that, I transitioned into my current CTO position in which I have a more outward-facing role, not just concerned about internal product development within Kitu but also working with others in the industry, primarily related to standards work and technical work groups, that affects not just Kitu but the entire ecosystem in general.

3. What has been the most fascinating or interesting project you have been a part of recently?
What was most fascinating for my career was being at the ground floor of two transformative consumer-related technologies. Before satellite television, people watched over-the-air analog TV and maybe had 13 or a handful of over-the-air channels and maybe 50 or so cable channels. But now we're designed a system that enables digital television with hundreds of channels, perhaps even too many channels for people to keep track of. It was that transition from the old analog television transmission to the more modern digital transmission.
So, I got into the ground floor of that and also got to the ground floor of internet access—very cheap, affordable, high-speed internet access for the home in the cable modem world. Back then, people were using dial-up telephone service for Internet access, and they're getting rates of 9600 bits per second, 56K, things that were fast in that time, but today is just painfully slow.
Being able to get into the ground floor of offering a system and an affordable product that can provide 10s of megabits and now hundreds of megabits approaching gigabits to the home is I think really interesting and transformative. I'm not sure I'll ever encounter another market or opportunity like that that can have such a significant impact to basically everybody in such a short period of time.

4. How would you describe the company culture at Kitu?

Before the pandemic, everyone worked in the office, had an open door, could collaborate relatively easily, and had a very informal, flat, egalitarian culture. Everyone was within driving distance of our office In San Diego, so it was very localized. Now, we have many more hybrid working opportunities and even fully remote employees everywhere, from Georgia to Colorado. The Company is increasingly geographically diverse, and you don't have that instant ability to walk into someone's office and ask questions. However, I think we've done a relatively good job of trying to have face-to-face calls and continuing to foster informal, intimate relationships in this new environment. Kitu has a very welcoming and collaborative culture overall.

5.. What are your goals for the future of Kitu?

From a technical perspective, the area of smart energy is in its own silos: you have the EV charging world, the solar provider world, and the storage system world, and everyone does their own independent thing. But Kitu and I believe that all these things have more in common than not. Everyone wants to be able to connect these devices, and provide smarter ways of operating, and more efficient ways of operating them.
The goal is to tie these together in a cohesive way such that everyone can share in the interoperability and efficiencies you gain from that and yet not step on each other's toes and have interoperability problems.
Part of our message is centered around the theme of harmonization for DistribuTECH. These smart devices that people are interconnecting can work well together, and we want to be a leader in making that happen.

6. As we approach the kickoff of DistribuTECH 2023 in San Diego, what are you most looking forward to during the conference?

I will be giving two presentations: the first is geared toward electric vehicle harmonization and all the standards and protocols used in the electric vehicle/ EV charging space. Kitu's message is that we need to be able to make sure that they all work together and not prohibit one another. One of the goals we have in our presentation is to lay out the landscape, what's there, what are the advantages and disadvantages of the various protocols currently being used, and how to make those protocols work in a harmonious manner with each other.
The second presentation is about 2030.5- many DistribuTECH visitors may have heard of It In passing but may not know much more. This is an opportunity for people to get a much deeper understanding, Introduction, or refresher. It's more of an open-ended freewheeling session for people to attend and ask anything they want. It's from the basics to some of the more esoteric aspects of 2030.5 and provides technical knowledge across that gamut of expertise.

As a basic summary and sneak peek, 2030.5 is a protocol that is geared for smart energy communications. It was designed to provide comprehensive support for energy related information. For example, you may want to send metrology data information - how much energy you're consuming. You may want to send pricing information - how much this energy costs today and tomorrow to give the consumer the information to optimize their energy usage. You may be interested in doing some smart charging - how do I effectively take advantage of the various prices and schedule the charging of my according? You may want to provide grid services to make the grid more resilient – how can I use IEEE-1547 functions to help stabilize the grid. IEEE 2030.5 has features to address all those things.

People at that time thought that smart energy meant communications inside the home. The electric meter was expected to be the hub of the smart home. You could consider the electric meter acting like a server and talking to various smart devices in the home like your thermostat, pool pump, or electric vehicle. Everyone thought smart energy, at least for a residential, meant within the home, so we began working on systems for that in-home type of communications. But it turns out that that’s not where the market for smart energy is; It’s from the home to the broader Internet. Communications from home devices, not just locally to other home devices, but to servers in the cloud operated by utilities or other service providers. Smart energy devices are now full-blown IoT devices. It’s fascinating to me how IEEE 2030.5 started out as a protocol for the home-area network but is now used primarily as a protocol for the wide-area internet.

From a technical point of view, it looks like a client-server model, and the communications is very, very similar to how a web browser communicates with a web server. 2030.5 decided not to invent new ways of doing things but to reuse existing communications models that are already there.

Register below for "Q&A with CTO Gordon Lum: A Recognized IEEE Standards Expert."

Limited attendance is available, so secure your spot today! 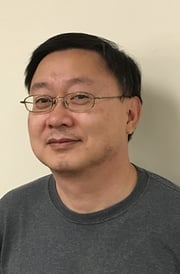 Gordon holds a BSEE from MIT and a MSEE from UCSD. He spent his first five years, after obtaining his degrees, working in defense communications at Linkabit. Later, Gordon’s career was dedicated to the early stages of digital satellite TV communications. In the mid-90s, he founded and acted as Vice President of Engineering at Corelent (FKA TurboNet) which developed the first certified DOCSIS cable modem, and he remained at the company for 15 years.

With over 25 years experience in the design, development, and deployment of all types of digital communications equipment, Gordon leads the company’s engineering team with overall responsibility for taking the G2H SEP2 Software to production. He joined Kitu in 2011 as Vice President of Engineering and is now the CTO.